Coming Out in Russia

a call to conscious lovers 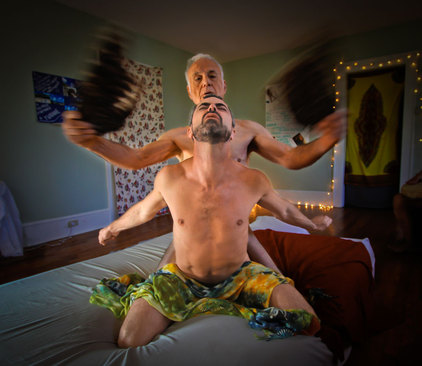 One year ago, my grandmother lay on her death bed.  She had been my best friend for 40 years, and I had promised her my full support when it came time for her final passage into the realm of spirit.   I had seen her struggle for one day too long...

And so at the break of day, on a cold Monday morning in November, I gathered the tribe together in her name.

It wasn't her tribe who gathered, but mine, for her.  My grandmother's tribe was her church.  She had been a devoted Southern Baptist.   Her hymns of praise came without judgement, and I adored her for her relationship to spirit. This day called for a very special prayer meeting of a Tribe which I knew could help me...The Tribe of lovers.

It was a most unusual rite of passage...a ritual in the name of the dying...and not just any ritual,  but one of ecstasy, summoned by two lovers.  I picked a lover who could do the job...unlikely to be my lover, in the eyes of this starving world.  He was a Methodist minister, twice my age.  He not only held two PhD's in philosophy and religion, but also happened to be the ONLY man I had ever met who had gone through the ENTIRE Body Electric School erotic education curriculum.  This man only got started when he turned 70!  Now, he was almost 80.  Old?  Yes.  Experienced?  Yes.  Holy?  Fuck yes!

The Reverend Norm Self arrived at my door just when the sun was starting to slant through the east - facing windows of my home and temple.  He brought two others with him...One to drum, and the other to take the pictures.  Two lovers, and still two more.  Yes, it takes a tribe.

The result is this article,  never before published,  and this photograph, never before seen.  I unveil them here, now, as a special dedication for  the people of Kalani Honua and the sustained global community who are connected through you.  I unveil it because you're a good place to start.   Yeah...let's start here, now...at home.  Blessed Be, and Amen!